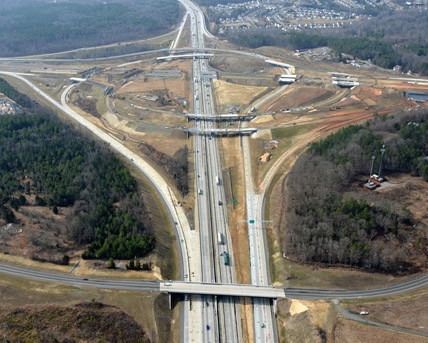 Our two big interstate road projects are finally coming to completion! State engineers say they will finish widening I-85 through Cabarrus County in April. The last leg of I-485 and the I-85/I-485 interchange should open in December.

Road planners and taxpayers should ooh and ah over the state’s first “turbine” interchange at I-485 and I-85 – built at a $50 million savings vs. traditional designs. The design’s so special, it even has its own movie on YouTube!

The computer-generated simulation lets viewers “fly” over the spiraling 19-bridge interchange or ride with traffic down one of its through lanes. Not only is this new design a third cheaper than in the past, it also will cost less to maintain yet take up no additional space, its designers say.

One of the last expanses of old rural Mallard Creek vanished two years ago as earth-movers started clearing the path for I-485. Johnston-Oehler Road is being realigned to take out some curves, add two new roads over the outer-belt road (with roundabouts, no less!) and add shade trees, sidewalks and bike lanes to the old farm-to-market roadway.

Some of the changes are linked to the radical interchange design taking shape around Prosperity Church Road. Back in the 1990s, Charlotte-Mecklenburg planners convinced the state to accept a novel land-use plan built around turning one exit – at Prosperity Church Road – into a cluster of exits onto three parallel streets. The idea was to diffuse traffic through new-urban villages on both sides of I-485.

Several pieces, including short roads seemingly to nowhere, have been in place for a decade (I-485 was originally scheduled to open here in 2002, after all). The finished network will have six roundabouts and two new service roads along I-485.

Did we mention that I-485 through University City will have eight lanes, vs. four lanes in the traffic-clogged part of I-85 in southeast Mecklenburg? Going last can have its benefits.