University City will be growing once again 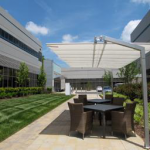 areas for the 2017 opening of the light-rail line. Another near IKEA makes room for businesses disrupted by the rail line. And a final case builds upon the astounding success of Innovation Park. Rumors suggest more rezonings are on their way.

On May 20, BECO South, the developer/owner of Innovation Park, held a public hearing to add up to 300,000 square feet of space to the 1.9 million square foot former IBM facility.

E-newsletter readers may recall the leasing success of Innovation Park. In around two years, it took occupancy from just over 30% to over 80% – an incredible feat during the economic downturn. Now over 5,000 people work in the amenity-filled complex that boasts bike checkout, electric car hook ups, a fully equipped gym, food service and stunning outdoor spaces.

The petition seeks to make use of the revised research (RE 3) zoning to maximize use of their 200-acre campus yet preserve its tree-filled setting. The Zoning Committee of the Planning Commission recommended approval at its May 29 meeting. Council will vote on the case (2013-046) on June 17.

At that same June 17 meeting, Council will hold a public hearing on the rezoning of a 39-acre site at the southeast corner of the I-85-University City Blvd interchange. When DDR bought the Belgate development that surrounds IKEA, they focused on their retail expertise and put outparcels on the market. In fact, one is under contract for a hotel and another will house a gas station – neither of which will require a rezoning.

The very detailed Belgate zoning that University City Partners’ board labored over had specified multifamily on the I-85/University City Blvd location since it will be close to a transit stop. The Arden Group is requesting a rezoning that will develop an Auto Mall that could accommodate up to five dealers. Auto Malls are the new trend and allow car buyers the chance to park once and walk from dealer to dealer. Proximity to rail will be a bonus for people who need car tune-ups – they can drop off their car and take transit to work.

In reviewing the petitions, the Land Use and Transportation Committee carefully examined the plan details, which differed greatly from yesterday’s barren car lots as well as the fact that two of the dealers would have had to leave the area. The ability to save University City jobs, tax revenues and investments was another plus for the committee. After the June 17 hearing and June 26 Zoning Committee vote, Petition 2013-052 will return for a Council vote on July 16.

Two earlier cases (2013-025 and 2013-033) moved easily through the rezoning process to allow for a surface Park n Ride lot at Old Concord Road and the parking deck planned at JW Clay and North Tryon. Their hearings were on April 15, and both were approved on May 20. We are happy to report that the recent relocation of Nona’s Sweets to the Worthington on Harris Boulevard (necessitated by the JW Clay deck) has garnered them a new group of fans. In fact, business is booming. In upcoming e-newsletters, we will update you as utility relocation and demolition begin along the transit line.